Our “TaoZen News” email newsletter… If you’d like to receive it in your inbox, sign up with your email here:

The Five Elements of Food~

In Qigong and Universal Tao, we work with the Five Elements: As they manifest in the organs of our Physical Body, in the feelings of our Mental-Emotional Body and in the energies of our Qi Body.  After a bit of time learning about the Five Elements, it really becomes second nature and a powerful way to navigate life.

We can expand this even further with Five Element Foods.  Although there are some subtleties, you can start today by just noting the colors of your food:

You can take it a little further when you pair color with taste:

In traditional Chinese medicine, it’s thought that if you are ill in certain parts of your body or organs, or if you are weak in certain of the Elements, you should consume certain colors/elements of food to heal and vitalize; i.e., if you have kidney issues, you should eat black/water color food, such as seaweed, and black sesame.

Here are some random collections of Element-Foods:

Green/Wood/Liver Food
Good for your liver, gallbladder, eyes, muscle, and joints: SO MANY green foods, but here are a few: mung bean, Chinese leeks, wasabi, and all the green vegetables and fruits.

But this little list is just a new lens through which to see your food.  It is not a rigid prescription!  The best approach to Five Element Eating is the same as any healthful diet:  Eat local, fresh and colorfully.

南方朱雀 – Vermilion Bird of the South~ 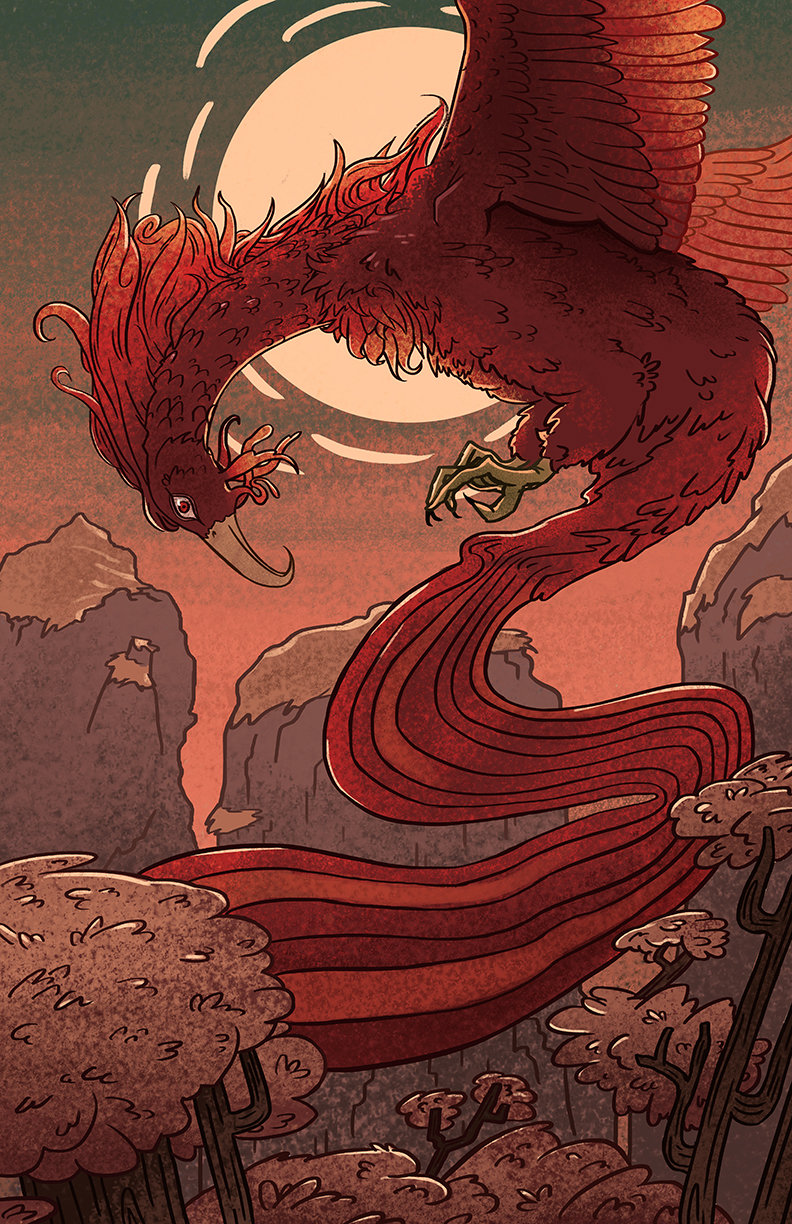 The Wu Zhang, four celestial creatures, each have their direction and season.  Summer is overseen by the Vermilion Bird of the South… and as we move through July into August she is here, wings outstretched, in her full glory.

The Vermilion Bird is one of the Four Symbols of the Chinese constellations. According to Wu Xing, the Taoist five-element system, it represents theFire element, the direction south, and the season summer. So it is sometimes called the Vermilion bird of the South (南方朱雀, Nán Fāng Zhū Què). It is known as Zhū Què in Chinese, Suzaku in Japanese, Jujak in Korean and Chu Tước in Vietnamese.

The constellation of the South represents summer, the element fire and vigor –  it embodies a strong yang energy.

According to the legend, the vermilion bird was born in a vermilion cave at the South pole, before he was worshiped as a constellation and as the king of the feathered.

The vermilion bird of the South is often compared with the phoenix (fènghuáng) or even equated – however their relation is more  vicariously. As one of the five celestial animals the vermilion bird stands for the cosmic principle, the phoenix represents rather an earthly variant of this idea. Their symbolic meaning is nevertheless (or just therefore) very similar. Like the phoenix, the vermilion bird is full of elegance and beauty and represents the five human qualities: virtue, duty, ritually correct behavior, humanity and reliability. It is regarded as a guarantee for favorable opportunities and financial success.

Simultaneously it stands for energy, fire, zest for action and public reputation. The bird evokes the feelings of joy and confidence. Like any winged creature it embodies freedom, overview, self-confidence, ease and spontaneity.

The beginning of the Year of the Earth Pig is coming up on February 5!  We’ll send more about the Chinese Astrology of the Earth Pig soon.  In the meantime, We’ll share some other images and myths of Pigs around the world.  This time:  Hawaii and Norse pigs:

In Hawaiian mythology,  Kamapuaʻa (“hog child”) is a hog-man fertility superhuman associated with Lono, the god of agriculture. The son of Hina and Kahikiula, the chief of Oahu, Kamapuaʻa was particularly connected with the island of Maui.

A kupua (demigod), Kamapuaʻa is best known for his romantic pursuit of the fire goddess Pele, with whom he shared a turbulent relationship. Despite Pele’s power, Kamapuaʻa’s persistence allows him to turn her lava rock into fertile soil.

Lilikalā Kameʻeleihiwa describes him as “defiant of all authority, bold and untamed, he recalls the pig nature that is dormant in most people….Treacherous and tender, he thirsts after the good things in life–adventure, love, and sensual pleasure….”

Hildisvíni is Freyja’s boar In Norse mythology.  The story of Hildisvíni appears in Hyndluljóð, an Old Norse poem. In the poem, Freyja is searching for the ancestry of her protégé, Óttar.  Freyja rides on her boar Hildisvíni, who is in fact Óttar in disguise. They meet the seer, Hyndla, and Freyja forces Hyndla to tell Óttar about his ancestors.

We also include our upcoming events in our newsletters, including workshops, courses and retreats.  Check the other pages on our websites to learn more.